I’m excited to share with you the following article about teaching music history to kids by guest blogger Gigi Sliger from the United States. Gigi, who has a Bachelor’s degree in Keyboard Studies: Piano, Organ, Harpsichord, and Synthesizer, teaches both piano and yoga to children at her home studio in Tennessee, Harmony and Balance Studio. When she’s not teaching piano or yoga, Gigi is traveling and working part time as a volunteer coordinator for Spartan Races, writing articles, and doing projects with her five-year-old son and nine-year-old daughter.  Enjoy!  – Nicola

What if music history could be taught to young piano students in a way that inspires them to apply it to their own music making?

To some of you, this might sound like a far stretch. Music history contains a lot of facts that can sometimes bore the student. Especially a young piano student who doesn’t quite see the purpose of learning music history on top of all the other requirements we, as teachers, expect of our students. 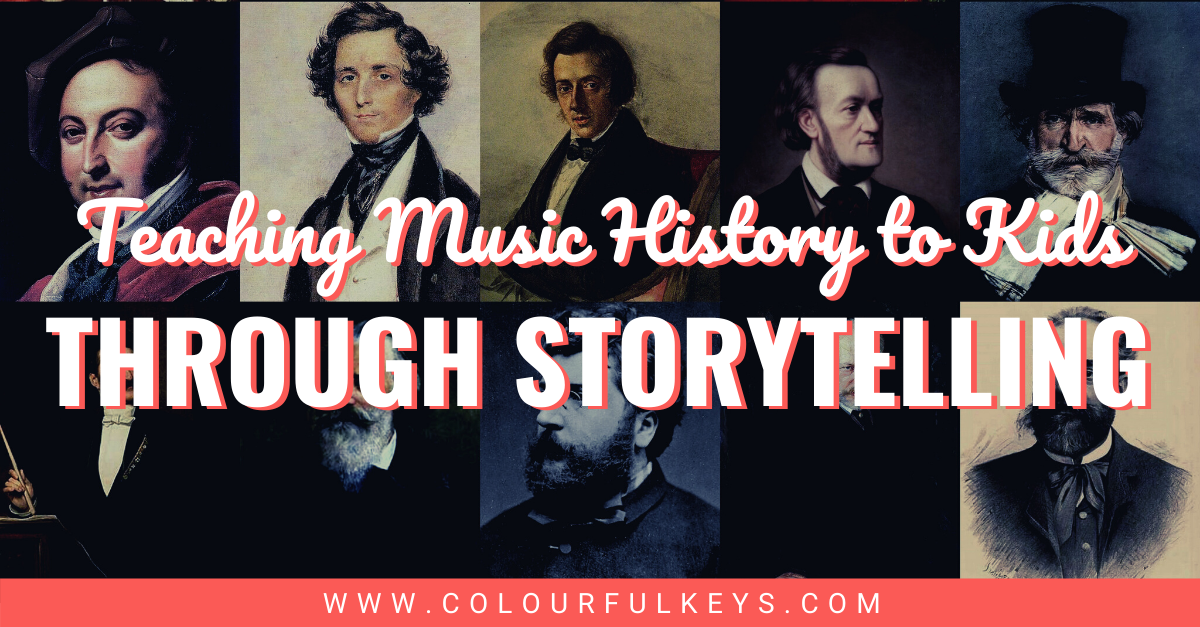 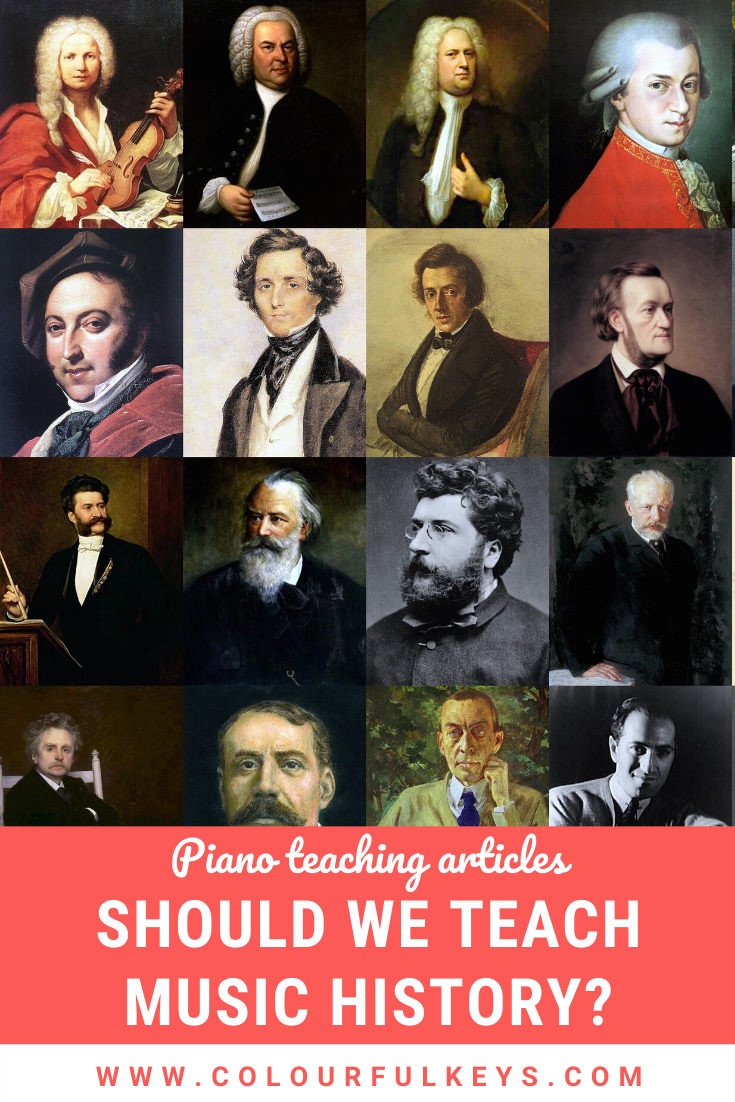 As teachers, we have had to learn and memorize such facts for tests and papers. But unless we were particularly enthralled by a specific composer or period of music, retaining that information on a long term basis can be difficult.

Perhaps even more difficult for a young student.

Put yourself in the place of a four-year-old who only has an attention span of 12-14 minutes or an eight-year-old with one hardly longer at 16-20 minutes. We may even start to question why it’s important to include music history in our piano lessons.

Is it worth it?

Every History is a Story

This is where storytelling comes in. Every child loves a good story.

Stories include characters, a setting, the main conflict, and a plot. Musicians and their music contain those in plenty.

In fact, it could be argued that every composer wrote his or her own life story through music.

For instance, my favorite composer, Robert Schumann, lived during the Romantic Era. He fell in love with his piano teacher’s daughter, Clara, even though her father forbade it.

Their love story became one of the best love stories of music history and it was all chronicled through their letters, journals, and their music.

At the same time, “Character Pieces” for the piano were becoming popular.

A staple of the Romantic Period, Character Pieces were most often piano pieces that revolved around a particular idea, emotion, or character. Often in ternary form but allowing for creativity and expression, the primary purpose was to invoke a mood.

Robert Schumann is famous for composing Character Pieces. He would go to the extent of creating character motifs that represented his friends. He even composed two motifs for himself – an expression of his two dueling personalities, which he named Florestan and Eusebius.

Robert Schumann is just one of the stories out there in the realm of music history.

When we help our students connect to stories like this, they will be more capable of remembering and applying it to their own music making.

Putting it in Action

So, how can you bring a story like this down to your piano student’s level so that they can apply it to their own music making?

Let’s imagine a seven-year-old. She has just been introduced to Robert Schumann’s Album for the Young. Whether she is preparing to play a piece from the album or is using it as a listening exercise, the first interesting bit of information you might share with her is that Robert Schumann himself wrote this music for his own seven-year-old daughter.

As your young student explores the Album for the Young, you can begin to tell the story of Robert Schumann and his love for stories and music.

Just like that, you have turned music history from a boring lecture into an enthralling subject.

Connect the Story to the Music

Once your student knows the story, make that story come alive in her own music making.

Ask her questions as she listens to the music. Consider personalities or moods that might come across.

Knowing that Robert Schumann was known for his character pieces and his own creative personalities might suggest to her that there is more happening in the music than meets the eye.

She doesn’t have to know exactly what the original mood was. She just has to start thinking creatively.

This leads to the next step: Taking a hands-on approach.

What is more hands on than composing? Yes, a seven-year-old student is just as capable of composing and creating music as older students are.

With your guidance and a little musical freedom, your student can start to create her own motifs.

Maybe she wants to write a short melody based on the personality of her best friend – or her kitty cat. Anything goes. Just allow her to think creatively and apply what she has learned about Robert Schumann’s music to her own motifs.

As a result, your student will be more connected to the other piano pieces that she is learning.

Teaching your students how to create a motif is just one idea. There are plenty of other hands on activities out there that can help students understand and apply music history to their own experiences.

Keeping a journal is something that many composers did to express their thoughts about their own music, as well as to critique other musicians’ music. This could be as simple as asking your student writing a sentence about the mood of a piece or drawing a picture of an image that comes to mind.

Giving your student the opportunity to think about the music as a story opens in her mind the possibility of creating. And when she understands that the composer of the piece she is studying also had a story of his own, the music can become more “real” to her.

In this way, she has experienced music history instead of just learning historical facts, and you have provided her with the opportunity to connect to the information on a more personal level.

For more fresh ideas on how to include music history in your lessons, you might like this article by Nicola.

We want our students to connect with their music and to feel confident when they play.

If we approach our students as fellow musicians from the moment they sit down at the piano in their first lesson, and share with them the stories of past musicians in the same way, they will retain and understand them better while also believing that they too are capable of this.

This gives them confidence to create their own music, which is what we as teachers are guiding them to do throughout their lessons.

So why is it important to teach music history to our young students?

Because it opens up a world of stories that they can become a part of, leading to inspiration and confidence in their own musical journey.

I hope that after reading this, you will consider including more music history in your lessons. Maybe, it will even inspire you to think more creatively about the music that you play and teach. Happy teaching!

You can learn more about Gigi and her studio on her Facebook page. For more ideas and inspiration about incorporating music history into your lessons, check out the Music History section of my Music Theory page.

1 thought on “Teaching Music History to Kids Through Storytelling”